You currently do not have any properties in your shortlist.

Ten historical facts you may not know about Southampton 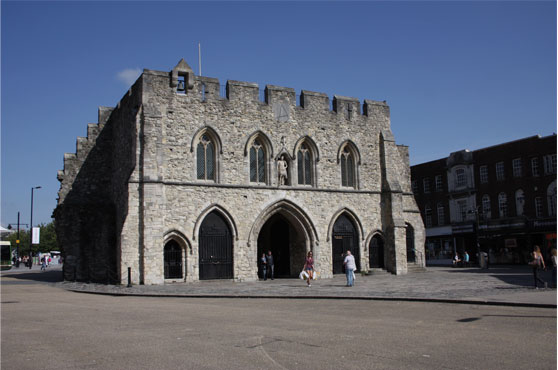 Almost quarter of a million people live in it, and countless more come to it every day, but like every city, Southampton has a number of hidden surprises and tales from its past that you may not know about.

Here are ten facts about the city's history that you may not know, designed to help you impress your friends and family next time you're wandering around Southampton:

1. A first at God's House Tower

God's House Tower, on the corner of Town Quay, Lower Canal Walk and Platform Road, was the first dedicated artillery fortification built in England. It was constructed in 1417, as part of the drive to fortify Southampton following the French raids some 80 years earlier. The town gunner was paid sixpence a week.

2. Cannons on The Platform

The Vokes Memorial Gardens in Platform Road were the site of The Platform. Cannons and artillery were stationed here as part of the defence of the town. The modern route of Platform Road and Canute Road roughly correspond to the natural shore line.

3. Living in The Ditches

Canal Walk was once a thriving narrow street full of shops and homes. Also known as The Ditches, it was originally the path of a stream along the outside of the Eastern Walls, taking waste from the old town, and later part of a canal. The water ran out to the the river under a bridge outside God's House Tower.

What is now Southampton Central Railway Station used to flood when there was a particularly high tide, as the shoreline was along the southern side of the station (what is now commonly known as "the Toys 'R' Us side" to modern Sotonians).

Also, the railway tunnel under the Civic Centre was originally intended to be part of a network of canals.

5. Ploughing in the parks

The Central Parks in Southampton were common land (Lammas lands) for residents of the medieval town, and used for cultivation up until August each year, when they were then used for grazing cattle. The bell on the top of the Bargate was used to to let those working in the fields when to return inside the town walls.

The parks were made into the green leisure spaces enjoyed by many today, in the mid 1800s and the cricket pitches in Hoglands Park have been used almost continuously since 1867.

6. A giant on the Bargate

On the northside of the Bargate, used to hang tapestries depicting Sir Bevois and his squire, the giant Ascupart. The tapestries now hang inside the Bargate. Legend has it that Bevois was the son of Guy, Count of Southampton. The count's wife asked a former lover to kill her husband in the Forest. Fearful of vengence from the 10-year-old Bevois, she orders him dead too, only for Bevois to be saved by his tutor.

Bevois is sold to pirates and has many adventures, including facing the 30ft tall Ascupart in battle. He defeats him, but rather than kill the giant, he makes him his squire. Eventually Bevois has his vengence on his stepfather and earns his inheritance - only to face more tragedy. The pair lend their name to various streets and areas across Southampton, such as Bevois Valley and Ascupart Street.

It may now be tucked away in a forgotten corner of the city, but the Crosshouse used to be known to most people in Southampton as a key stop on many local journeys. Its exact age is not known, but is believed to be at least 600 years old. It was built as a shelter for anyone waiting for a ferry from the eastern side of the River Itchen to what is now the city centre.

The circular stone building is in four segments - hence the name Crosshouse - so it can provide shelter regardless of where the wind and rain is coming from. The Itchen ferry was later replaced by the Floating Bridge and then the Itchen Bridge, meaning there was little demand for the Crosshouse as a shelter for travellers.

8. Making a mark in history

The shields on the north side of the Bargate, above the gateway, symbolise some of the most notable families that lived within the town. They were added to the building in the late 1700s to honour 'Parliamentary representatives and leading burgesses and benefactors' of the town at the time.

9. Lepers at the Civic Centre?

The site of the Civic Centre - which incidentally was the first building in the country to have the name Civic Centre - was a large open space for residents of Southampton, and used for many events, including the memorial service following the sinking of Titanic in 1912.

During medieval times it was the site of the Magdalene hospital for lepers and fields around it were known as Magdalene's Fields. Overtime, Magdalene became 'Marlands' which is how the area got its name. Part of the deal to construct the Civic Centre was that more social housing was built in Southampton - leading to the building of the Flower Roads estate in Swaythling.

10. A leak changed the history of the world

The Mayflower, the famed ship which brought the Pilgrim Fathers to America, actually set sail from Southampton. There were in fact two ships - The Mayflower and The Speedwell, which left Southampton together in early August, 1620.

However, the smaller Speedwell was soon found to be taking on water, so the two ships diverted to Dartmouth for repairs before setting sail again, only for The Speedwell to spring yet another leak. All the passengers then clambered onto The Mayflower and continued on for Cape Cod in New England that September.

There is a memorial to the Mayflower at the corner of Town Quay and Western Esplanade, opposite Mayflower Park. It is not known if the two ships were moored at either Town Quay or at West Quay, before they left Southampton.

Southampton played a major role in the success of fish fingers. Clarence Birdseye tested herring sticks and cod sticks on shoppers in Southampton and South Wales. The Southampton customers loved the cod sticks, which then became known as fish fingers and rolled out across the country.

Thinking of renting or letting in Southampton? Talk to us.

Cookies help us improve your Tenant Direct online experience. If you accept their use, continue using our site.